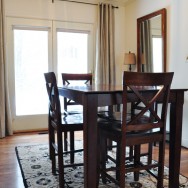 When You Give A House A Mirror: A Quick Update.

It all started with a mirror.

A $30 thrift store mirror, in fact, which I haggled down to $25. It was very large with a clean beveled edge and a gorgeous burled wood frame reminiscent of the 1950s, the era in which this house was built, and while I’m not typically a mid-century modern kind of gal, I lugged the thing to the back of my Tracker because, hey. A steal’s a steal. END_OF_DOCUMENT_TOKEN_TO_BE_REPLACED

I only have a few hours in paradise, and Because I’m me, I didn’t write anything ahead of time. 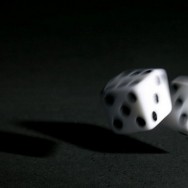 Love As Defined On Page 45.

“Pick up the nearest book to you, and turn it to page 45. The first sentence explains your love life.” END_OF_DOCUMENT_TOKEN_TO_BE_REPLACED

Crap. I Guess I’m One of Those Moms.

Yesterday afternoon, a veterinarian laughed at me.

Apparently I’m that crazy dog mother who, even though I never dress my dogs in sweaters (or any kind of clothing save the occasional reflective vest on nighttime walks), appears utterly ridiculous to non-dog owners.

And all of the assistants in the veterinarian’s office.

But for some inexplicable reason, I feel inclined to tell you — no, I need everyone to know — that I’m really not that kind of dog mom — the kind who takes her dogs to the vet for every little ailment.

That time, I didn’t feed him cotton balls.

But then, a few nights ago, Mara started acting strange.  She tucked her tail between her legs, got all shivery and panty, and hid in our bathroom for several hours.

I did things.  Things that would make Caesar Milan roll over in his grave if he were, you know, not actually alive.

I pet.  I coddled.  I lay with her on the cold bathroom floor.

I knew she was hurting, but she couldn’t tell me what was wrong.  It was the most frustrating feeling in the world.

Then, miraculously and right before bed, she was fine again.

Until the next night.

For three nights in a row.

So you see, I had to take her to the vet.

What if she had diabetes?  Or Cushing’s?  Or cancer?!

The internet is a very scary place when it comes to self — or pet — diagnosis.

So I booked an appointment and took her in.

They laughed and told me she was perfectly healthy and definitely does not have diabetes and sure they could charge me for all kinds of blood work and X-rays and the like if I wanted to screen for cancer, but she showed no obvious signs of the disease which, if she had it, would not be particular about the time of day it displayed its symptoms, and maybe I have a ghost in my house.

But, more likely, she felt sick that first night, got treated with all kinds of love and attention, and decided to do it again.

Or she’s picking up on the strain of Justin’s imminent deployment.

Either way, she’s fine, and they decided to not charge me for the visit since the intense humiliation overbearing dog mothers are forced to feel upon examination is payment — and entertainment — enough.

And the bitch of it is, I feel like if I were a *cough*real*cough* mother and not just a dog mother, I’d just be all, “What’s wrong with you?  Your tummy hurts?  Just pop a Pepto, dust it off, and go back to bed.  Mama just opened a bottle of wine.”

But there’s something about these faces…

…that makes me do crazy, crazy things.

And that, I think, is probably what it feels like to be a mother.

P.S. You should probably check out this post of yore for some exceptionally hilarious faces.

We All Jumped Down the Rabbit Hole and Managed to Keep Our Heads.

If you’ve been reading this blog for a while, you already know that I have a soft spot in my heart for people who break convention.

For people who say, “I don’t care what the sheeple want — I want what I want, and if it means that the so-called Rule Makers of the Universe — the Simon Cowells and the Joan Rivers and all of the popular girls in all of the high schools in all of the land — point their snide noses in my direction, then I must be doing something right.”

See, in this world, there are good rules, and there are bad rules.

Good rules, like having to wear seat belts in moving vehicles to we don’t pose a danger to ourselves or others by becoming flailing, rubbery, projectile objects during the event of a collision, help protect us from our own laziness and stupidity.

Bad rules, however, like those that tell us we can’t drink at baby showers and we can’t wear a black shirt with brown boots, only exist because someone who was once the slightest bit influential (and is now likely dead, in rehab, or no longer relevant) once said it out loud.

And puh-leez.  Black and brown go with anything.  So why wouldn’t they go with each other?

And we all know how I feel about drinking at baby showers.

Imagine my excitement when I received an invitation — nay, an order, from the Queen of Hearts herself, to follow the White Rabbit to a “simply mad” wedding, where all of the guests would be wearing vintage inspired clothing and hats.

It was going to be like make-believe for grown ups.

I mean, c’mon.  You wouldn’t have to twist my arm to get me to jump down that rabbit hole.

Or any rabbit hole, now that I think about it.

Except maybe a real one.

The details were out of this world.

I was there, too.  Showing off my mad croquet skills.

This is me.  Winning.

I’m pretty sure they didn’t have cell phones in Wonderland, people.

Yep. That one’s mine.

This part was way cool.  The DJ played music from Tim Burton’s Alice in Wonderland, and the bride’s parents came out as the King and Queen of Hearts.

Makeup change!  She even got her groom to wear the hat for 30 seconds.  Thirty seconds of AWESOME.

This “bouquet” must have weighed 35 pounds. It was incredible.

There were only 35-or-so guests at this Alice in Wonderland theme wedding, and each one played along, which really made it magical.

Most people scoffed when the bride told them her plans.

All I can say is, I’m glad they didn’t bring her down.

I think it’s Taylor Swift who sings, “People throw rocks at things that shine.”  And shine, that evening did.

So.  Maybe Taylor knows what she’s talking about, after all.

Well, kids, I still don’t have a computer. I almost have a computer, thanks to my geeky husband and his geeky coworker, but she’s not quite blog ready. Which means I’m attempting to fat-finger type this on my phone, which isn’t going so well. Not well at all. And I should probably stop before my husband has to fix another electronic device because this one somehow ended up in the pond out front.

(In case you didn’t hear on the Facebook page, I’ve had another computer incident. I’m not ready to talk about it. But things should be ready to go again by this weekend.)

Turkey is a Narcotic

Man, do I suck at this whole commitment thing or what?

I just realized that I took off for several days without even telling you guys that I’d be gone or where I’d be going or what you said to make me leave.  (Seriously, you guys owe me a huge apology.  That shizzle was spiteful.)

Chuckles and I have been in North Carolina since Friday having an early Thanksgiving with the extended family and I’d meant to keep posting all the while but I’ve been gorging mercilessly on the top of the Food Pyramid (Hello?  Sugars and fats?  Did anyone pay attention in P.E. class?) for three days straight without exerting any physical effort whatsoever and now my fingers are too chubby to operate a normal-sized keyboard.

So there’s that, plus the fact that (a) I forgot my camera cable so I can’t upload any pictures and (b) Chuckles just bought a new laptop and everytime I try to move the cursor using the mousepad, the *$#*?@ thing mocks, literally mocks, my efforts by either scrolling wildly to the very bottom of the screen or somehow shrinking the text size down to, like, microscopic and if I have to deal with this much longer my heart is going to stop busying itself with the task of trying to pump out the lard I’ve been feeding it and start doing the angry warehouse dance Kevin Bacon does in Footloose and then I’m going to keel over and die from a bad 80’s flashback and coming in to your living room to find someone on your couch keeled over a greasy laptop with a deep-fat-fried drumstick still hanging halfway out of her mouth is just not a pleasant Thanksgiving Day memory for any host to have, even if it did kind of serve me right because I’m the kind of crappy houseguest who doesn’t replace toilet paper rolls and eats the rest of the sweet potato casserole without asking.

So like I said.  It’s hasn’t been the best circumstances to work under here, folks.

And this is just the first Thanksgiving.  Chuckles and I will be packing up our stuff Wednesday morning and heading back to Maryland for Thanksgiving: The Sequel at our friends’ house on Thursday.

So, in between traveling and packing/unpacking and stuffing my face, I’ll try to crank out a few posts.  Don’t give up on me just yet.

But in the meantime, hope everyone’s getting geared up for their own awesome Thanksgiving plans.

And may God have mercy on our arteries.

I’ve Found the Perfect Job for Me…

I am confident that I would make a highly-qualified addition to your dynamic team because I have spent the last 29 years being a foul-mouthed, mean-spirited, judgmental shrew who frequently makes fun of strangers and anyone else I deem unlikely or unable to retaliate.  I also can’t be left alone with cookies that aren’t mine, I talk loudly on my cell phone in public and I giggle when I see people trip.  I believe that all of these qualities prove that I am the unparalleled choice for carrying on your company’s proud name.

Oh, and something about family planning or reproductive health.  Or whatever.

I look forward to hearing from you.

We’ve had quite the whirlwind weekend here, friends.

And we’ll be sure to tell you all about it as soon as we collect ourselves, pull the twigs out of our hair and find our missing shoes.

Until then, though, rest assured that the next few posts will feature plenty o’ stories, plenty o’ pictures and plenty o’ inappropriate cross-species relationship such as this:

The dog is the only one who looks appropriately embarrassed about the situation.

Quick Snap: Who, What, Where, When

A more substantial post is in the works for this afternoon, but in the meantime, here’s a quick snap:

Who:  Stacy and Katie

What:  Movin’ boxes and counting down.

Where:  Directorate of Public Works